Museum day. We walk across into the Warehouse district past Lafayette Sq and further deep. A sort of lazy tepid weariness about our walk. Tredging on the slabs, pulling ourselves or clawing onto smells and hedge floers to keep us motivated. Mum’a almost sick. A thikening clouds cover grows on us and I suspect it’s the atmospheric pressure. So we try to pull back into shape in the CAC Cafe just before visiting. But mum wraps herself back to the hotel. I stay over and in 10′ hear the skies crack open.

Roaming from one room to another, trying to digest the wallwide black-white projections and make sense of it, there’s a second feel that grows on me. Stronger. As the waterflow outside bombards the ceiling, the window planks, the sides, the wide beams of wood and steel. All impressed changing mood into dark grey.  I feel in grandma’s house. Wood all above. A thick layer of rain tin drumming the house into a different sky. Watershed floating your room, your bed to the centre of the flooded high. Like a different type of Dorothy, in a different type of Oz. I watch the trees out in the garden. Dark bark awash with hope. They look so much like the arcs and columns 30 years from now. In a museum, on the riverbanks of art. Mid-ssissippi.

+ teens of New Orleans – cute teen art, some quite promissing.

Sat a decent 20′ on the loo. Deep in the heart of the building. Not phoning mum, who must have been drenched by then running home. But going through brochure notes and wiki-es to understand a bit more about this guy. As at first glance the huge wall pieces meant too little. A bit of research was due. Venturing out again then. With a handful of clues aboard. Ok. More sense. But not enough for a space like this.

In the end spent too much here, 2.5 hours, for what it had to offer. But went thoroghly through about everything in.

Ogden Museum – 5th floor – Arthur Kern and his resin sculptures. Strange deformed bodies or faces aride horses or in bubbles. I’d come across a gallery supervisor on Julia street later who was anxious to go see this guy. The guy at the ticket office also- some kind of foretelling: “go to the fifth floor first”. So Kern, some sort of artist who’d shut away from the world finally letting his creations catch the public eye. One who’d work for himself with no need to exhibit. Pure creative enclosure. 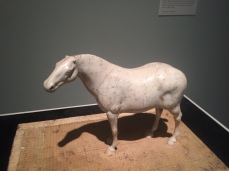 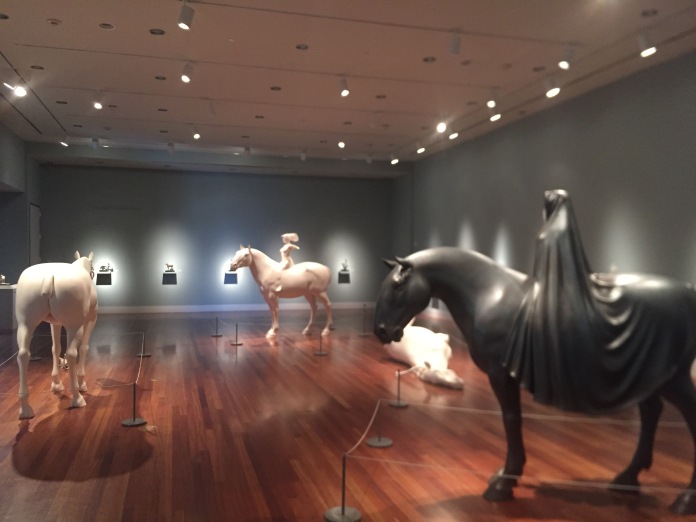 Strange morphed sculptures. The multi versions of a girl on top of a horse, the sexuality of it, the morphism of bodies into erotic/reproductive stances, the adulation of the female body, seemed at times naive, at times grotesque. A strange transition from adoration to esthetic gaze. I’d have gone for smth a lot more visceral. So it wasn’t this that impressed me, but the horse-woman morphisms, or the inner identity layering in other sculptures. While the mechano-organic pieces of eyes/arms combined, that sort of borg-ism was more inspiring. So much that going through that gallery my mind was already turning. By the end of the corridor I was building windowshaped landscapes of my own. 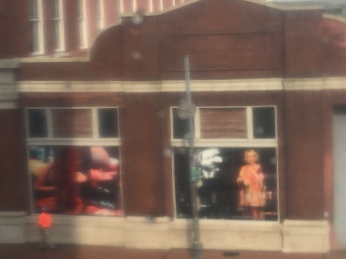 4th floor a nearly capsized rugged boat with a muddled net has a madonna suspended, nearly air floating on one of its sides: Resurrection (2008) by Sharon Kopriva 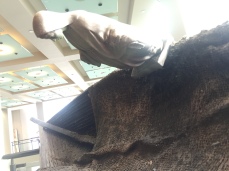 Appropriate suspension. It netted my feelings and attachment fast into a humane-religious symbolism. The dust of faith, the disappearance of the men in the boat, the transcendence of hope. A feeling of sorrow and lightness flowing together. A presence. The soul fisher that is not there but you feel Him in the suspense of it. Hope is no longer attached to a physical resolution, but of a transitional tone toward something more evanescent. Life vapors. You’d need to almost kneel to see her face.

Then Lonnie Holley –  Profile of an Artist with Grandmother Inside

A stoney figure of traditional design, where you find age carved out of archetypes. The wooden frame, the support – a raft of emotions. Like the wooden ceiling of my grandma’s. With her face watermarked over times and memories. 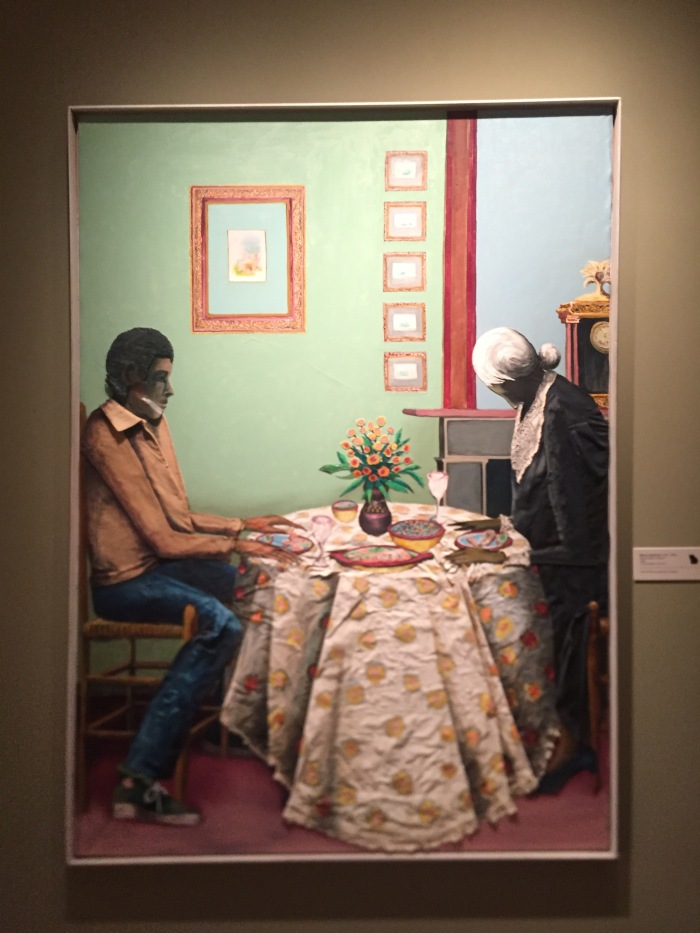 A similar feel as above, same pool of emotions, online relation to the hands and the series of pictures I took 13-14 years ago with mum&gramum. Plus the the tastes so impregnates onto my memories of gran’s cooking. That intimacy of sitting together over it.

Cast away on the streets after less than 1h or so. Only had a quick art run in Ogden, So I end up wandering for additional arthouse experiences. 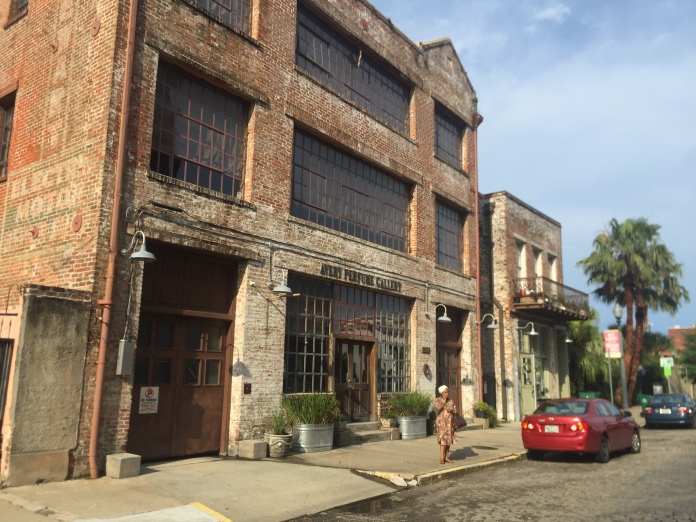 Meeting Jordan in an art gallery. We speak abt museums a bit, she tells me about the Arts District/Warehouse district, where most galleries (18 of them) are on Julia Street or just off. Intru si eu in care ma inspira si mai sunt deschise la ora asta (18:00 or so). Talked to her about the bead puppets/sculpture artist I come across in her gallery (who’d been on display at the jazz fest as well):

si despre o lucrare a lui Elizabeth Chen, care arata ca o coloana vertebrala suspendata orizontal facuta din minislideuri consecutive that morph continents from one to another, in blue, while decorated with various design stuff. This one’s an architect mainly. But does art projects once in a while. Reminds me of how I imagined a joint piece of Georgiana arranged in a cinematic imaginary design I had in mind.

Then went into Octavia art gallery cause the vegetation and flowers on their walls, the process, reminded me of Miquel Barcello‘s underwater pieces.

A couple of monotypes drawn on wood then transferred onto paper in a series of coatings, quite eerie graphic pieces, the contour and the way initial layers were veiled by a “sandblasting” process of applying the ink. Or that impression, that it felt like carved graphite. By Suzi Davidoff: 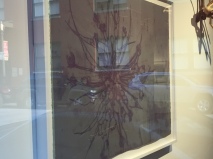 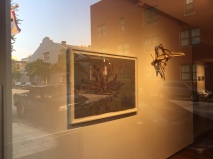 Intently watched the carbon crayon strokes then for twirls/volumetric bushes of weeds and branches rapt together. The dynamism. More about technique, this was by the second artist – Sherry Owens

Talked to Kristina L Larson – the gallery director – about them.

V2 Gallery with Jed Malitz after.

Attracted by some similarly but more figurative twigs in the window, http://www.jedmalitzv2.com/Artist-Susan-Saladino.html

An optical topographical technique in the end that looked like a hologram, or a sculpture into light. Luminous suspensions. A surprising approach for further discovery was to watch them form the sidelines, as if into the border of the frame(s). That made you uncover a delight of bright. Talked a lot to him. About his wife, his choices in life, about New Orleans, why he returned here, how he left computer work after 17 years of work and got into art. How hard it is. Glad or flattered that I saw the core aspect about his work straight was surprised I wasn’t into art myself. But then explained to each other what’s the shady side of this choice. Why this might end up as just an intense alter-passion and not the main thing for me.

A stint at the Lafayette Square for the traditional Jazz Fest Wednesday. A park music party in the square between the two Jazz fest weekends. Played gigantic Jenga with a kid while our mums were watching with worry and amusement. Worry that the large 2 feet high tower might fall on the girl. Mama backed off home soon after. I cruised onto Frenchmen Street again. Marvelling at the night substance on the flow. Live and sculpted silhouettes. 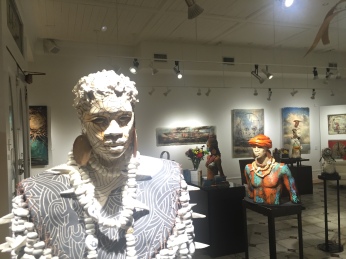 Third night. T’was a sold out event, but managed to find my way in. There’s a story about cookies and the ticket master slipping me a piece of torn paper with a key word scribbled on it. The doorwoman laughs at the candid secrecy and tears the piece of paper like she would a ticket while letting me in.

Joe Krown first
emulates the piano style and plays out pieces of some of New Orleans standouts. Like James Booker – New Orleans piano player that died too early (44) a true genius (according to Joe Krown) 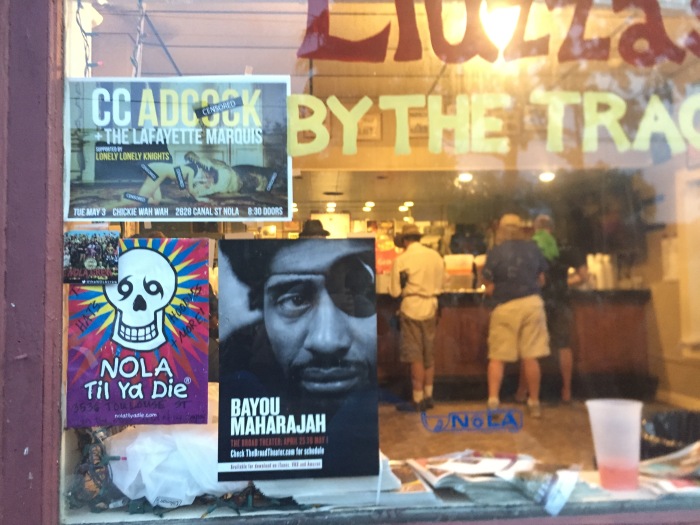 Classified – one of his more popular tunes
Funny is that I saw a picture of him in the jazz memorabilia posters in the Fairgrounds tents. But had no clue who he’d been.
Alan Tucson – Lipstick Traces
Mess around – a controversial song, who actually wrote it…

Turns out Joe K was my favourite player that night.

Marcia Ball – not that impressed initially. Though skillful she was. Felt at some points ppl were more empathetic to her being as good as the guys while being a woman…(?!) Or maybe they knew more about her than I did.
She turned out to be quite sparkling and often taking the other two over in the stellar closing performance of the night – all of them three playing together at the same piano. At once! Voila:

Lingered on the streets a bit more after. But found the bed. Needed to. Our last night of Jazz fest was next (Thursday of the second weekend), and we wanted to be there sharply at opening 11:00ish.