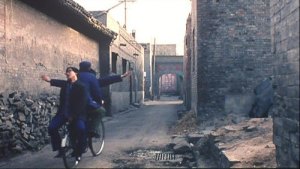 Post post: Awaited a longer while to start posting about this year’s London Film Festival. I’ve seen and taken notes on over 32 films. Life consisting of: work, RUN from work to films chosen either on the spot or a couple of days in advance, Q&E after a lot of screenings, RUN between venues and last minute rushing into the cinema, chasing better positioned empty seats, cycling slowly back home in a false impression of FINALLY some time to float. Home barely eating anything, taking notes on what I’d seen and often falling asleep in weird positions while doing that. A pace of 2 screenings a day during weekdays and 4 a day on Saturdays and Sundays. On average about 4-5 hours of sleep a night for 10 days. Almost no proper shower, shave or socialising during this period. A sense of achievement however in spite of these … human shortcomings. Often reminding myself of a similar passion my uncle has for George Enescu festival. He’d somehow instilled this attitude towards what I really like back in my teens… when I was 15-17 and he’d take me to concerts, 2-3 a day, then we’d hide the night away in a rented studio (seulement pendant le festival) like bachelors. The only difference was that he’d be a gentleman going to and being with music. Whereas I am a parkhour backpacker jumping hoops through traffic on a bike and hustling my way in. Somehow feels appropriate: one should desperately go for something he really wants! and time and money (or lack of) are but meek impediments to what you need to see/feel/experience . BE THERE! Back as a student I’d learnt ways to get myself into theatres and even sold out Enescu nights or other events.. a physical or sometimes relationship labyrinth of ways in I’d almost always decipher. Now, 20 years later I teleport myself from place to place and it is the need to share that I find more acute then anything. To share it with a double, triple or deviant remorphed version of me, which is you! of course.
Somehow rereading these notes I get this feeling, that they are from a stranger, to whose taste and preferences I often subscribe. But not always. And it is this imperfect overlapping that raises new questions or interogations of every moment passed or present.

One of the holdups in posting the full fest notes was however a very specific one. Everytime I’d come over first day’s words I felt the need to first see at least two other films by Jia. Platform and Still Life. Which I finally did. The former barely finished seeing today after falling asleep on half hours of it several evenings this week. It is that same mix of amasement and rejoice of the craft of GOOD filmmaking crossed with nostalgia of other times and flashes of the transitional past I lived through out of one era into another that I am left with after all this. Platform made me want to cut slices out of it and show you the false drive into a time piece, then exquisitely turned up and made alive and very present through site and sound, screen presence and refined acting skills. Almost low note. But so accurate of a reality I did live through. Of the nights at the cultural centre in my grandma’s village, the dillapidated building where’re we’d (me and my brother) enjoy the poorly projected films so much, the rust and shines of transition from communism to modern life, one we’d nevertheless sing to and live with a full heart, the dusted roads, the ever chasing a longing love, while on trains, on crowded busses, nights without electricity shabby present but trusted friends; and the dire reality of a decrepit political main backdrop to which most of reality freightingly confirms. An even more engrossing one here with the birth control schemes and the executions, the odes to the party leaders, and the rebells in the making. A stark reality of what smothered love would end up like. What an average normal family of the 1990’s could be like.

And now let the festival begin:

One thought on “My autumn of films: London Film Festival 2015”