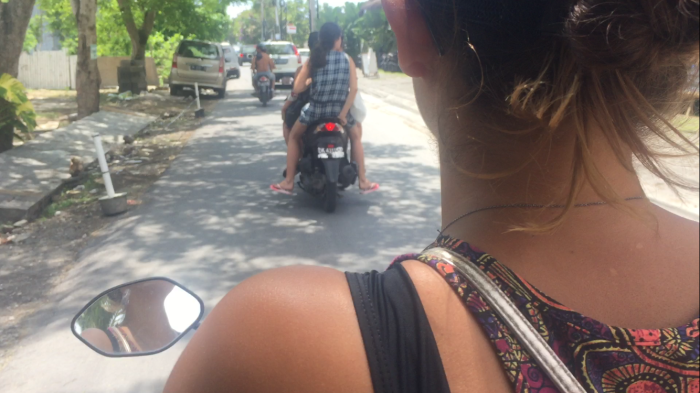 compared to Crina let’s say who is just a steady driving energy, unwavering, a lean but lethal traffic cut in and onto the street flow).

But come to think of it, there were mixed motives.
You know that feeling of not knowing where ethics stay in the use of your hands when first time on the backseat of a bike. When there’s just friendship and you donno what else. Plus she did really make me feel very welcomed, smoothing things a lot.
so this mix of gratitude and kind familiarity. Freeriding into the night. Waiting for the next unknown to pronounce itself, reveal some sort of nuance at least one which would allow me to unwrap the story further into this new world.
Our stay: A tall modern vila, simple and neatly arranged. Tall ceilings, the similar 6sqm pool you get at this type if villas, alush with palms and reed rugs to protect from rain. 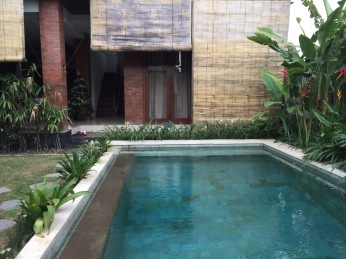 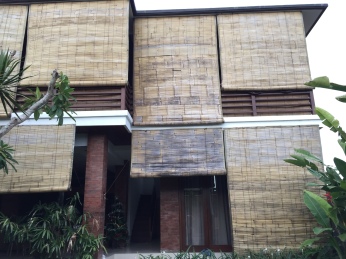 Parked up in RV’s at around 1:30 AM. She quickly showered the rain off and dastardly back to her new prospect.
Got Sorin on a Xmas phone call and then tried to wash back to proper standards.
RV returned way too soon, like about just 1h later. I’d thought she wdn’t return. I wdn’t have in her place. She fell asleep dressed up stretched on the bed waiting for me to finish washing my hair. Warned her she’d be in for a long wait. Like a log! No move for hours. Slipped out on the porch and waved my hair to dry in the air, danced a bit, brisk shines on the wooden and cream slabs of silence. Tried to listen to the globular layers of quiet openness out there. Some house tops eeking brown curvy woody edges into the shades. Thought I heard some roosters at some point very far away. But some night chirps as well. An occasional dystonic gekko. Or the finches perched on the line behind the corners.
R did some funny digging into the sheets when I went to bed, briefly stirred o to senses, for the donno what, aircon remote (?) as if reaching for an inner pocket behind her back. But after a few seconds struggle she froze back to another few hours when I accidentally woke to find her unmoved.

Transgresiuni oniric erotice se imbulzeau pe la colturile noptii. The night ride, the smell and sensuality of barely seen mostly felt smelt and tasted new “this-balisland” reality were pushing the boundaries between subconscious and manifestation. Kept everything at bay and let it all diffuse back into alter realities, slept on it. I needed to appropriate all these energies and make them work to a more reach experience the following days.

Late nearly midday rush to b’fast with Crina next day. Full on at a hipster locally run bar fashioned for the western abundant flow of culturally more or less versatile travelers. Met all girls plus Aa. Then got to know Crina’s ride mastering the road to a club type of beach place – Potato Head – an expat type of place with pool and services catered for the more up tide type of bali-spender. Loved the music vibe, a DJ chillouting the laid back crowd. I got onto the beach as well, but was asked mot to bathe, probably to keep the pool clean of impurities should I return to the exclusive area.
Our girls lined out in beauty lines. I noticed E was reading “The Hero With a Thousand Faces”
https://en.m.wikipedia.org/wiki/The_Hero_with_a_Thousand_Faces
and I logged into John Campbell myself. surprised to stumble onto the myth ideas and its functions into the hands of someone I could tell not much about. She was the one that had kept silent most of the time till then. So I tried to find out more. And felt my enthusiasm rushing into my voice as I recounted some basic elements that drove me around since well… high school?, or before that. Leaving a constant trace of scope in my drives in life. One of the main reasons why I chose Bali: my notes on Andrei Serban’s life from A Biography
http://atelier.liternet.ro/articol/3606/Andrei-Serban/O-biografie.html
where Bali was an important pinpoint on the map of esoteric spiritual dance. And theatre.
And now reading about John Campbell’s work on this patch of grass sheltered from the spirits felt I needed to open up again. “You gotta go to Ubud!” she said then.
Later on that night I finished the wiki article on JC, and jumping from George Lucas to his application of transformative myth stumbled onto American Graffiti. In my face, need to see what was all about. Part of that “Easy Rider” films you MUST see to understand what was going on and pretty much how you ended up going on about a good part of your life. Being as a consequence of or a rode after the absolute ride of those years. Well, turned out this was just early 60s in the rock and roll America. Richard Dreyfuss, Harrison Ford a d others at a very young age. Watched it, read then about it a bit more, tried to understand that type of mythology now inbuilt in the grains of our later pop myth makers, the seeders pf Star Wars, the forefounding times of Steve Jobs and the gurus that were to shape our present. Seemed all that cruising and r&r time was of a precocious superficial teenagehood that to me lacked the dramatism I’d seen in Rebel Without a Cause
https://en.m.wikipedia.org/wiki/Rebel_Without_a_Cause .
That had been to me a much more interesting anguish of the age well placed into the context of time. This other one was interesting but less engaging. Even frustrating at times with the smothering of options done in a cuddly familial way in the end by a couple in the film. But good to have seen what legacy and what myth is to USA.