A terrible affirmation story for sherpas on Everest and the significance and importance of their contribution to an essentially western principle of marking achievement. Of how we define success: getting to the highest peak. Still leaves a hovering question of some misunderstanding in the whole conflict between mourning sherpas and what their intentions were perceived as. The leader of the expedition taking on rumours of sherpa-to-sherpa threats. And using this as an interpretation of why the season had to be cancelled. Essentially because of peer to peer bullying into coercion. Whereas sherpas were more willing to just not trespass a mourning site.

Great landscape shots. A film closer to realities and overpower of the landscape. An overlap of Son, Moon, and the Everest points to how natural events of this order belong more to astronomical size events. And dwarf money issues, power issues, leaving you to a realisation of a moral and living refinement that is beyond these things, more personal and yet more ethereal. That is where the shreds of buddhist and hindu references in this film fit. Where my memories of Tibet found a correspondence with. Where I lie with this story. It won the best doc award in this festival, BUT!, in the context of transfiguring significance the dance documentary “Mr Gaga” is still the winner for me.

with Cate Blanchett and Robert Redford

Enjoyable piece of docudrama with, again, a good performance from both main actors. Same recipe as in similar films about important issues/dramas built Hollywood style to fake a high point and draw you into a more intrusive actual one to engage you along. This one’s a story of real events happening in the pre-election of George Bush Jr for the second term. Revolves around him being a protege and landing a safe place to avoid Vietnam draft. And the story and respective reporters being slammed to pieces when they reveal it. It’s about freedom of speech and the detours around truth when power comes into play. I liked it, but no revelation essentially. Other than it’s so damn hard to fight the establishment when it comes to the necessity of truth. Some stark comments in a Redford-Blanchett exchange about the reality of how people perceive news today and the public’s disengagement with the effort of essentially a proper understanding and exercise in democracy. While almost any active attitude ends up nailed against the wall.

Intermezzo – A lighter shade of grey this evening walking from this show in Leicester Square to the next at Curzon Mayfair. Light walk. Talked to Ad on the way to. About his preparations for the US residency and the last minute rushes. We’ve… well in fact I’ve been missing a couple of chances to meet up with him this weekend. Ended up talking about how I manage when I time-miss-manage. And about films, the films so far. So in the end about me again… phhh. Ok.

Sketchy raindrops, but somehow still open to light. Passing by a girl on a bank in the park. Some air before heading into the cinema. “Nu te-am facut eu sa vii aici..!”. she’s Romanian! Speaks on the phone to someone. a disparut intr-o clipa de neatentie. Ma oprisem pentru o fraza. She was sideways sitting squatted on the bench. Late 20’s? Next thing she’s 150m away walking down a side alley. Aaa uite, se grabea sa se intalneasca cu sotul. Her baby in a pushcart. That’s why. Rain stopped. Wind rustles. Green Park. Toamna pe la colturi.

Let’s see who’s in CurzMayFay. That girl again maybe? Will talk a bit more about all this. About ALL.

18:00 Ingrid Bergman – In Her Own Words  by Stig Björkman

Well until recently I didn’t know that she was Isabella Rossellini’s mum. Though it should’ve been so obvious. She was so much like her in her young age.

Enjoyed it. There may be a facial and attitude in her similar to some those in some of my lovers. Hence a fascination with that angelic expression touched with melancholy… a sadness a bit restrained in  Ingrid and more obvious in Isabella, one which I saw the previous night in the moments of grief Lou Roy-Lecollinet showed off, a sensual post orgasmic tristesse I often saw inY. Otherwise astonished at the degree of largesse Ingrid had in just going and doing with her life as she wanted. Felt almost like an exquisite choice a spoiled diva would have, but still, in all her home movies she displayed a convincing fairness and openness, an un-presumptuous human touch. Though I wish I had that kind of freedom, I’m so much more attracted to what she missed in her parenthood right now… However, I am indeed driven more into that Peter Pannic persona when I am with my nephews/friend’s children, etc. I’m falling into the friend stance Ingrid was instead of that of a parent. There’s a good degree of psychological progress maybe that still awaits me… Of her photos, the most discoursing ones seem to be those trembling, or with shifted silhouettes, moved, almost blurry, especially those from her beginnings. Where’s a vibration of life, of change, of frailty and instability. Each of those is an image that dances in my eyes, and that’s how it lives.

With Jouliette Binoche and yes.. a second eye-catching “Lou” of this film festival – Lou de Laage. Another french young talent.

How can it be so intensely vivid and put on life with such slomo sensuality so convincingly?, given the underlying motive is death. 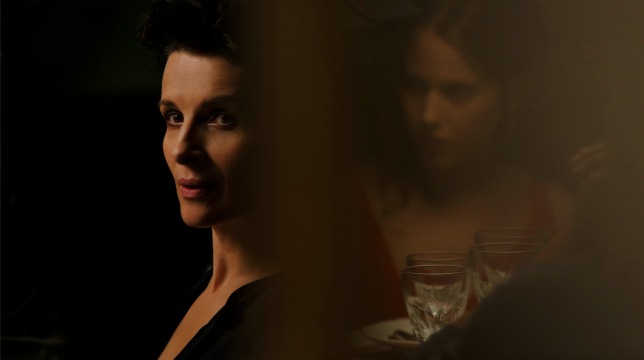 Unbelievable playing, some of the best if not the best female acting in this film festival. Binoche is beyond words!, (so I merely sketch here…) the way she shifts from one emotion to another, so expressive and subtle. A stream of emotional phrases sliding swiftly from one shadow to another as she’s simply just watching you, not changing almost anything in her gaze. Unbelievable. I’ve seen her playing like this before, and my connection to her is sometimes so emotional I forget words or the meaning of them … but hmmm..    on my way TO the cinema I had a lapsus – couldn’t remember her name!. That word erasing sensation I sometimes get after imagery overflow. So I was trying all sorts of tricks to snap out of it. Was saying all sort of french actors and actresses names. Just saying things in French, and names of films that reminded me of of her. “Blue” by Kieslowski was coming back to me like a leitmotif. And yes, this is where I last remember her with a similarly powerful performance. A deluge of subtle feelings. Amazing.

How about the girl … so much beauty. No wonder the director.. I was just thinking this couldn’t have been his first film. Too good. Such a sure hand, I could barely find any mistake. Maybe in a slight continuity problem on the lakeshore. And not even that as it’s not discontinuity, but a light incongruence. Doesn’t matter. As the resultant image of the faces is so finely balanced in contrast/neutrally. Then I find out this guy was Sorrentino’s assistant director for La Grande Bellezza. So now I understand where those long takes of oversaturated sensuality and clarity in almost every shot come from. No to mention the stunning opening where I initially thought that was a statue of a diver about to jump, then almost sensing the carnality of the image. Also the so inspired pace of colour moods in the airport scanning-conveyor-belt, or the ones of a drop of light lost in the total blackness of the screen – that of a window being closed, or that of Ana’s face lit by the mobile’s light. Like a ghostly rendition of her face in “Blue”.

Then the music, and sound design. Impressive, really!  But almost every shot is of incredible beauty, in the very classic sense.

This is the film Paolo Sorentino could have done but didn’t make this year. Still a very own voice for this fresh director. Allowing so much space for interpretation.

I recognise in Binoche and am finally willing to admits that there is in her so much of my mum. Like she was at every of her life stages. In filmul asta cu atat mai mult. Or when she’s young or feeling young. So fresh. 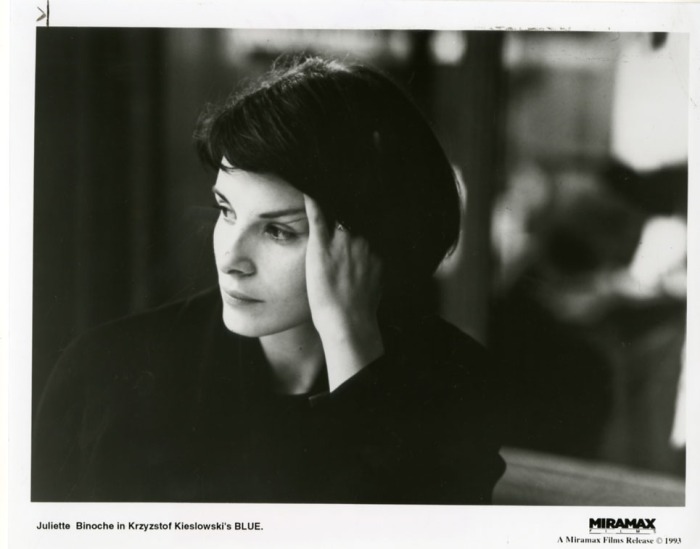