Woke up late at 10′ to 11:00 and the first film option was at 12:00 PM – the Ingrid Bergman doc. Was still half gutted/somewhat disturbed by the dream with Radu and the two of us going to high school. Checking on the life signs… weird. Plus the exams I was supposed to go through for an isda sort of certification, and a bloomberg(?) exam… the first goaded into by CriM. And then the fleeting hellos and kisses with him and Tralook.

Academic detailed documented and explained account of how and why was the film FILM by Samuel Becket made. The director – Alan Schneider, Buster Keaton as the main actor, how surrealism fed into it visually and the perception of the I = eye… 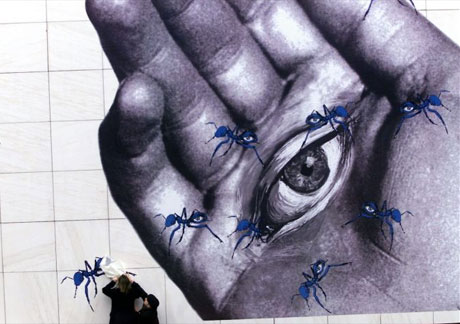 countering the idea of existence as only when perceived, even if actively involved in the act of being perceived , an idea that George Berkeley advanced. And here it contends with the concept that perception of self is the one that matter and not extraneous perception. Or not primarily the external perception (by others) of self. 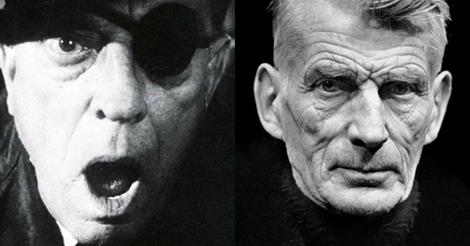 Felt I connected with it, but also not as engaging as I thought, as the critique veered a lot towards the personality of Becket and how cryptic he could be. The film felt at times like a Maya Deren visual landscape. Hence my impression of surrealism. 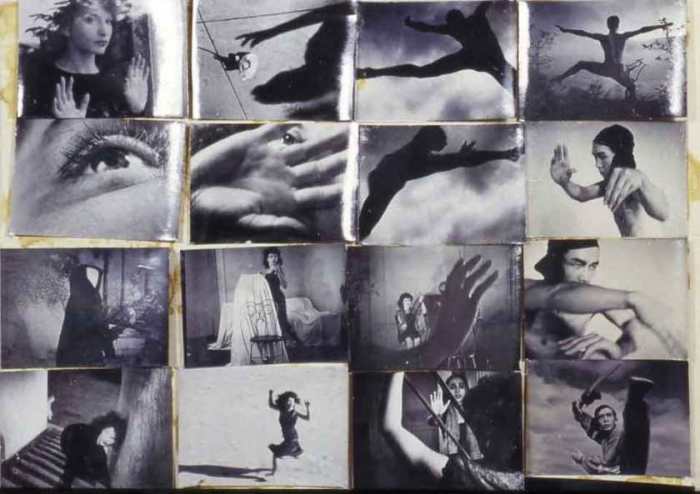 A lot of references to the The Man with a Movie Camera by soviet director Dziga Vertov and the eye slashing scene in Un Chien Andalou by Bunuel.

A good surprise to hear THE MAN himself on tape. The film states that SB was so reluctant and reclusive that no recorded tape of his voice had existed. And now this…! You expect a sort of stern thundering voice. And you do perceive the sternness of it. But as grey and sound cracking as a crumpled, pigment degraded, old b/w picture of SB would look like. Unexpected how  these would juxtapose: the world of silent cinema and its protagonists and SB’s rich world of ideas in a void of abstractness, a heart/life felt abstraction about self, belief, reason, existence.

15:30 Embrace of the Serpent by Ciro Guerra 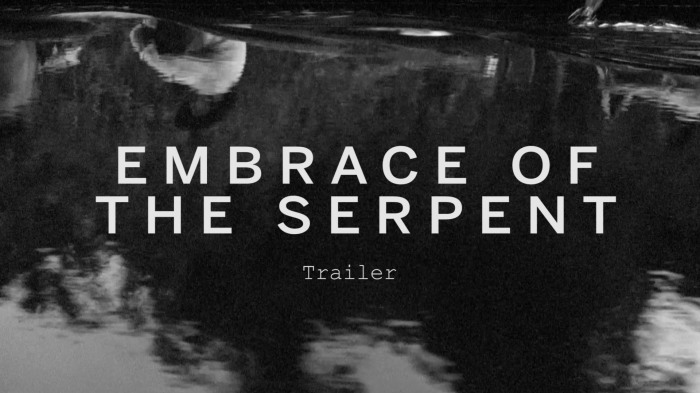 A 2-hour jungle black and white extravaganza, except for a single drop of hallucinatory colour. The idea of exploratory adventure reminiscent, well… of the daring discoverers from the early XX-th century, the dares of Scott and Amundsen  … and YES, overwhelmingly reminiscent of Aguirre-heart of desire, Wrath of God actually (false memories of titles who actually express more about this experience, and about how it links to my previous ones as well), and the Heart of Darkness expectations, plus that special wink to Fitzcaraldo by Herzog when the phonograph is turned on. 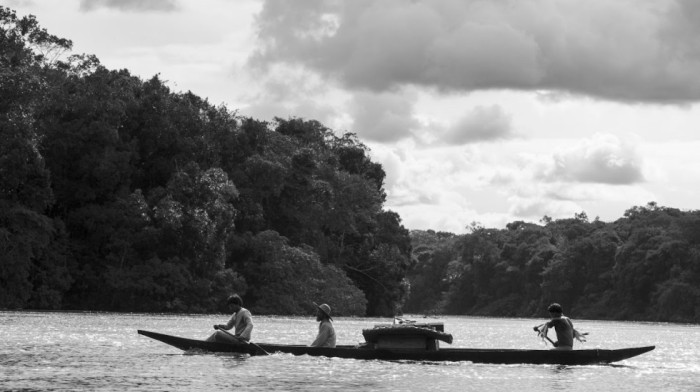 A overbearing, but full experience I was in for from the beginning. Rushed like crazy to catch it and got in just as the first swaths of rocks and water were swarming in, .. or .. hold on, was this the first glimpse?: the Boa/Anaconda mum in a sweltering tangle of offsprings, just giving birth, holding some in her mouth, eating(?!) unhatched bundles of placenta.. all in smouldering closeup mix of small and big, thin and monstrous, slow thickness hissing and gliding into each other… that was too, at the start of things, at the heart of it.

The first explorer in the 1910s being associated with a big snake or a panther/jaguar, or both, alternatively, standing each other off, maybe having a go at each other. The jaguar garbs some of the offsprings I think, later in the film. But that’s just in your face reality tinged symbolism. The film is about people, search of that Graalic flower (proves to be an orchid).

I felt lost in the narrative here and there, almost hypnotically at times, as it felt like a longer retelling of the same ideas of lost traditional paradises and how civilisation so perilously transforms either into destructive antagonisms or deviant religious reinterpretations. There was a fragment where the loss of a pastor, as cruel and sometimes misguided as he was left the children in the mission village alone, ripe for a new “Lord of the Flies”  like society. 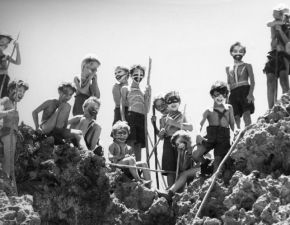 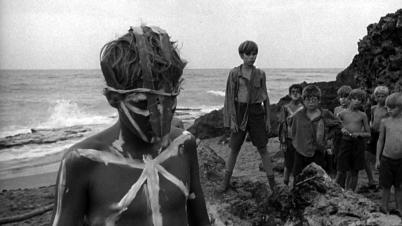 Isolated in the jungle, ready to offspring something new, create its own rules from that crude mix of traditional and modern mysticism. And 40 years later when the same guide with a new explorer comes upon them… we find everything turned into a making of a new religious cult centred on a Wrath-of-God like false messiah, as crazy as Aguirre but empty. Void of any super aura. An episode of christianity losing track massively into a simulacrum of idolatrism.

All however reminded me of the airborne fascination I experienced when flying back from Bolivia across Peru onto Miami returning home to Europe last year. The vast areas of intricate rivers and unending surface of trees… as far as to the horizon, it seemed dwarfed by my high altitude reference point, but in browsing that from my window I was gradually taking in the immensity of it all. The Amazonian jungle.

A taiwanese film about a brother and a sister reuniting over the years through memories and re-experiencing childhood related sensations and memories, especially surrounding their relationship with their mother.  Was attracted by the high dose of sensibility and the girls particular emotional attachment disposition while reading the synopsis, partly confirmed by the viewing. And the brief first minute of the trailer sealed the choice by a rich blend of colourful immersions into painting and into underwater choreographies. Indeed this was maybe the strongest point of the film. The force or beauty of the ocean through underwater (solo fluidity dance) shots or shore hit by incoming furious waves under a brisk warm sunlight. A melancholic sweet film. Very remindful of a similar one last year (about a mother passing away in a spiritual form and family love scenario on an island) and in some ways about another one a year before – on the poetry of wise old age, even if different in plot and aim. This one’s a film about the need to be in a warm hearted family.

21:15 My Golden Days  by Arnaud Desplechin with Mathieu Amalric

Nailed it! I’m part of this. How.. annoyingly so at times… but still

No, not the first one. It’s the second poster that stuck in my mind, with the face of Eva Green standing out and her audacious look:

A story of adolescence, late one in my case, of teenage love and crazy passion without no apparent reasoning behind. Again a film with how I’d imagine teenage love would be happening in France/western culture. But not in that promiscuous senseless delve into sexuality from Bang-Gang. But a more meaningful relationship. Be it at a distance as it’s in this case.

I’ve been there, loved like that, form both sides of the fence. As stupid and absurd it may seem when it comes to clinging. But it was that ease with which partners browse over their partner’s infidelities that I could not take in. Maybe it happens a lot more, but my world had been silver-lined by a sort of moral coating where this type of refuge from solitude leaves deep grooves of pain. It is only later, like two-three or so years ago that I would come to accept this as a natural order. And still seek someone’s true core beyond this. I would manage to love with less and less if not almost no remorse.

But back then… yeah. My days and nights in the empty room. Wide open living room with but a mattress thrown on the floor, a coffee table and a flat screen. Us exploring each other more and more. And me living all this like a dream of youth. Allowing myself to shift from one dramatic love into yet to realise another one. I had bought this film to watch together, and though she watched, I think she didn’t understand how I would be fascinated by it, how would I be next to her and not feel her, obscure a want for her just to watch a film filled with sexual desire and exploration. And then she’d invade me, my senses. And I’d let the lights of the film just project onto her barren waist, with her vagina open shamelessly, and a psychological line of denouement stretched across her pulsating gut as the blanket would draw an imaginary curtain between her breasts and mouth lingering in the shadow, and her extremely erotic soul pouring over my sensing breath here below. I would watch and tease her undergut with my gaze. Whispering slant looks into her and waiting for her every gasp in anticipation of it all. All this forging a slow blast into each other’s world then that we’d have such a hard time to find a separated life years after. That was our dream world unfolding dans en vertige. Our statement. Total immersion .

And still kept an innocence beyond recognition, one I still can’t really shake off, even after all these years. I still am a lot of that. But maybe less innocent about it. Playing tennis against the wall in the living room, naked on the rugs taking pictures of our joys and sadness. Throwing clothes out the window, crashing cars in traffic, hiding flowers behind each bed or in the armoire, underwater. I live that still, only now in slow slow ralenti as this reels back in front of me. And the sensuous peer, the mindless, languid looks Lou Roy-Lecollet  had held so much more meaning in this context to me. 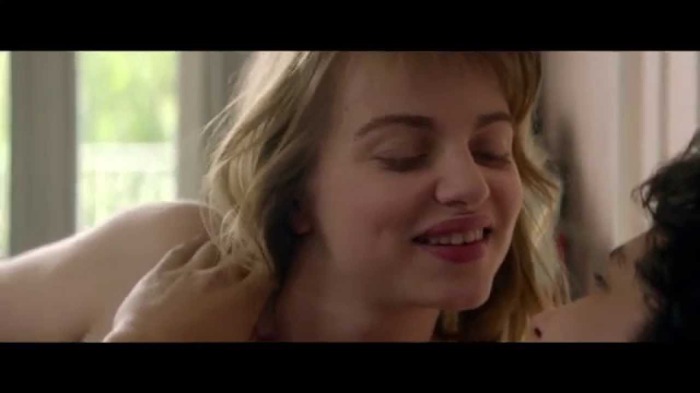 That now, as I go through this I feel this again, but at a different tempo as all this is gone.

this is… funny enough, the theme song of tomorrow’s film: L’Attesa by Piero Messina. But that one is from another story, the telling of the LAST DAY of the London Film Festival,  which will come… it will.

After the film I sent a message to Anastasia Asenka, a salsa passing friend, to whom the main character of Esther resembles so much. The hair, the looks, even the lips, the way they double layer when she smiles.

“Hi Ana. I’m at the London Film Festival, seeing film after film … but just coming out of one where I couldn’t but see your face over and over again. The lead actress has your demure, your sensuality, and looks. She doesn’t climb mountains and she’s not faaar east russian. But catches the eye nonetheless. So if you haven’t got bored of images of you in your life give this film a go. Quite entertaining. Not an overwhelming one, light enough and touching enough to get you. A love story in the end. “My Golden Days”. By Arnaud Desplechin.  A french film but plenty of references to Russia funny enough.”