Just passing by a street piece of art, with very sexual first impressions. Black and white flowing in and out of mouths, body openings, eyes all over. Then I read a pencilled scribbling near: 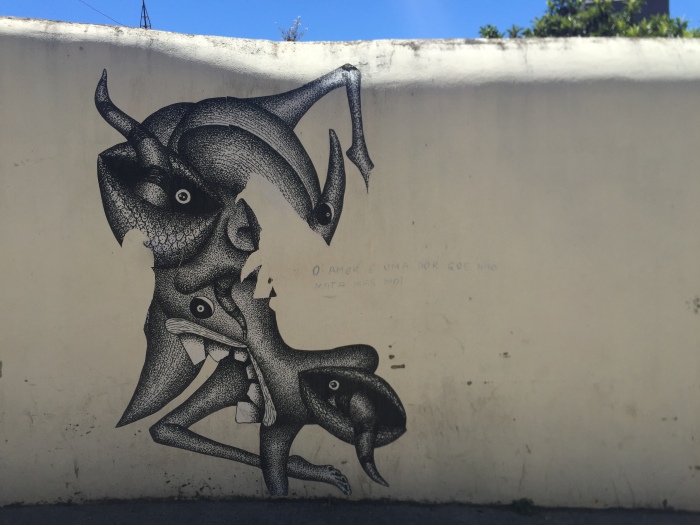 Why doesn’t it kill “me”?, because “me” practice it way too much?, or rather… it does not kill me… but YOU! 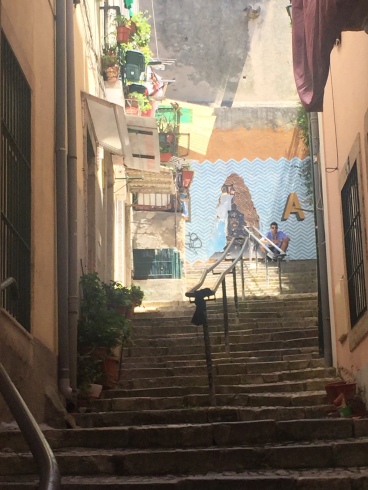 Woke up late, after Dn vanished in thin morning air off to a labyrinth of European flight tracks to Syros. And I was left sharing the good bye hours with ‘R-ee, M si Arabela. Lost myself on the Lisbon acropolis, on streets of MEMORIES. Picked up one of Lala and M from six years ago in Canary islands, called her. Felt good. Then walked down through lost corners and steps via gangster alleys and rushed to Belem to catch the girls.

At a terrace, italian food I guess. Or was it? maybe just italian waiters. But we drifted quickly into my day’s findings. Checked their first sight impressions of the graffiti above. With Ni’s quick catch on the sexuality of it. While A&R beating around the bush with less adherence to the hardcore. We bridge the fractured meaning of it and the text addition. The word error and what he meant to write. Obviously a different guy, as hooked on the viscerality of it as me and Ni were. 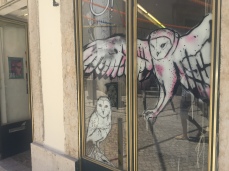 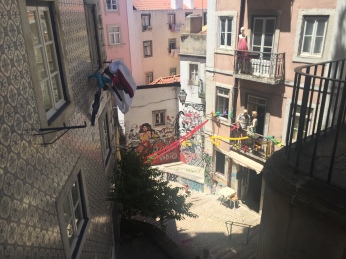 Then onto that cuban sultry poem. And in the midst of it we suddenly look up kama sutra – the wheelbarrow. Is this it? well, now that you say, it could be…. But, it was way too obvious to me. However in a much richer context of course. Like listening to Pulsar Triyo or Pat Metheny while doing it, drop in dark red and an affluence of pulse.(https://www.youtube.com/watch?v=tDVdCLm4G0E )

A. brings up Eminescu…  but why? Eminescu?!! I mean, ok, historically, lyrically, somewhat sub referenced, but you could’ve… , ok never mind. I let her have it.  But I thought this place, this city called more for Fernando Pessoa or a sultry Donna miraculata

Funny how sex context talk can trigger sweet and sour memories of love.  I – drawing the sensitive dark violet petunia over a thick brute male-ism. Unplanned. Dar daca am inceput… devin atent la detalii. zgandarindu-le a provocare pe fete. Was already dwelling over a line thrown by A the day before – how she hoped for luck in love, I wondered why. She had the looks to get it. On second thought though I saw an inner “dress(?)code”, keeping her into context minutiae, involved, preoccupied with common good and sense, but otherwise slightly insecure. A limping heart.  Both her and N casually mention their each former lover. Aware. But sounding more like a freudian slip. N a lot more self confident. Stable. R I felt knew me better. Didn’t let go. Maybe she’d seen me in play before. (has she?..)  Relaxed but no cardinal veils off. Oh, maybe one time, when both of them had a flash thought. Unrevealed though. And it was their own world. Mundanity of friendship. Things sometimes rhyme in silence.

Left them a-running. Rushed to the nearest museum. Saw the Coach one.. (caught off guard, as the building looked more like a modern art site…) Luckily there was a small Pessoa gallery upstairs that saved me from total disappointment. Carriages, no matter how luxurious, had not been on my list of priorities in Lisbon. At all!

Then onto Museo de Electricidade. Well, that’s what I’d been looking for. Had 20 minutes to have a taste of a juicy section on light design and art.  A drop.

Hastily back to the centre. Catching the pre-match energies condensing in Praca do Comercio.

At the apartment, cleared out and shutting the door behind me, I lingered on in the building’s hallway. Vast staircase lobby, wooden  squeaky floor and tall ceilings. Hooked onto wifi. O ascultam pe nebuna aia de Grimes dandu-se in stamba. Degeaba.

Grabbing a juicy ice-cream. Humid calor. Uber to airport. Drive talk with the man – a guy who was much more detailed and expletive about economy and way of living with crisis in Portugal. Former business owner, a construction company that went bust. Entrepreneurial. In his mid 30s.

Airport waiting hall – glued on the football match. Like half of those there. Nada. Only while up in the air, one hour later we find out. Portugal won! France disgraciada.

“Heart in hand I’ve been walking all over the city, treading the first snow of the year under my feet. And my heart, sprinkled with wine and with vinegar, went on rotting away to the beat of my years – all thirty and seven of them – while the magpies assembled on the drummer-boy’s shoulder. Bones alone couldn’t save me. Nor could your name, Argentina, you, Land of Promise. Only a big yellow dog had mercy on me – humbly walked up to me and ate up my heart, taking his time. Then he left, moving away towards the horizon like an enormous sun flower”. (Doina Ioanid)