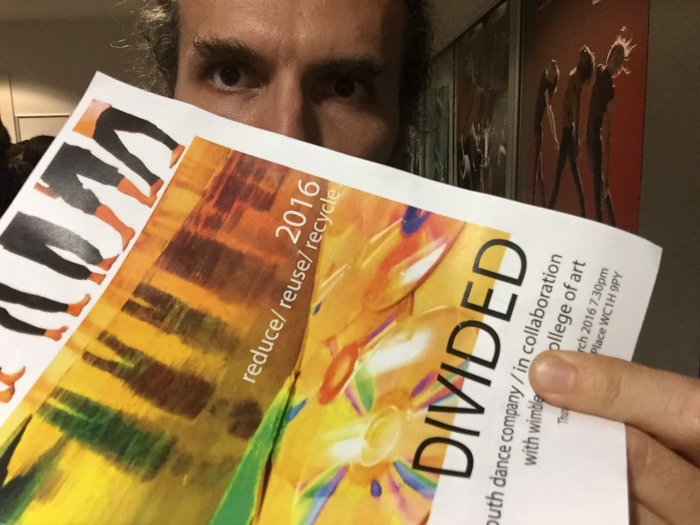 Unexpected meltdown of simultaneous choreographies. Five at the same time in an underground wider studio. Female dominated. One piece had two guys and one girl. Otherwise just girls in all other choreos. The ingenuity of youth, the ludic, the focus on conceptual approach, rushed through takes, the breathing, fluent, then the imposition of the idea. Passion, and warmth. Some dancers were very eye catchers, with attitude, charisma.

The Ch Ch Ch Changes piece was a mix of play and challenging your stand in relation to meaning, implication, your will and ability to change. Almost confrontational. 2 girls.

REwind was a mind and relationship piece. Six dance variants played between six girls. Someone in the audience threw a dice and they went for either of the dance sequences. I wish I watched a bit more of it. It was at times a disposition of power attitude/and connection of bodies, almost like a chess game sometimes. Interestingly weaved with thread from a box of scattered spools. Same idea of lines pulling the group together or apart. The Game of Threads I’d call it.

The Plastic Planet was a reference to DJ-ing, discs and hip-hop-disco. Less engaging for me. But ok.

The centre piece – Lost in Clouds. A duet. Two girls dancing on a carpet inlayered with a blue silicon sheet. Like a silicon floor drawing board. Underneath suspended stocking elongations like those of Ernesto Neto. 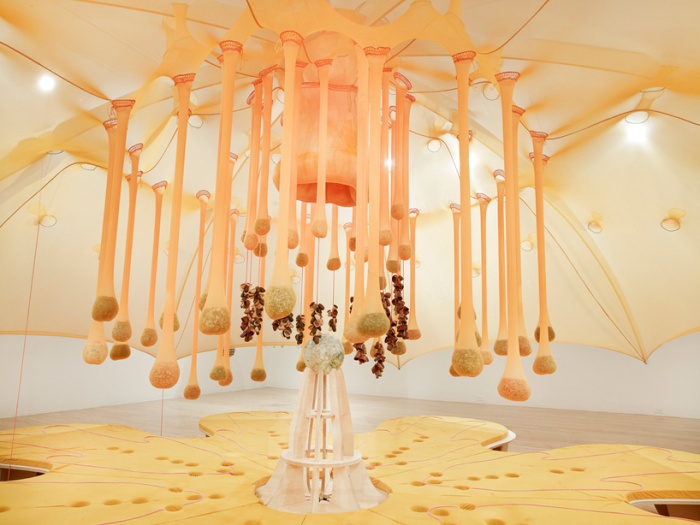 Lots of contact dance. Very strong energy, one girl particularly charismatic, exuding passion and sensual physicality. I would have liked to dance with her. A soulcast Dotty version. Casual smiles, writing their dance not just on the blue surface, but in the air as well. A fluid intensity interspersed with moments of abandoned “post orgasmic” breaks, gasps on the floor. Catching breath, and again.

“Comfort?” was however the one that captured most of me. A three girl piece, in a circled ring, with other suspended rings above them. A dance where bodies where relating to clothing items, blouses and sweaters, tied together, then stretched, connecting, flying around, almost like a joggling fight, but in a mellow, light tone. Girls pulling apart, dancing their own prospecting. Then reconnected.One girl obsessing over the materials. Dressing and tying the  all to herself with unexpected dexterity. A need for hugging, female sensibility and candour. The chemistry between all of them was fascinating. No excesses. a tender total immersion in what they did.

ALL of the above on a perfect sound design at times fantabulously entrancing. A choreography of sounds and musical layering. Mix of dubstep grooves, live percussions, whistles and live jazz piano. Fantastic. So engaging I wanted it to be my dance club! My preferred night club. With all this in dance and all!  Music alone and it was still worth going to. Quite a performance. Not intrusive, but engaging. A treat!

and yes.. it was the youth element that you could feel. All over. That openness. That enthusiasm. I felt trembling along with them. My mind was building shapes and hand-body combinations. I was dancing with someone in my heart. Wordless, contouch. Still meditative about it all. I had that space to flowbreathe these impression.

Writing now. Different mind shape. A shadow of the one from above. Still joy! 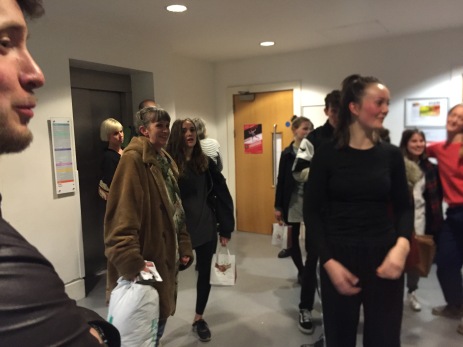